Since I released the original Arduino Joystick Library (see http://mheironimus.blogspot.com/2015/11/arduino-joystick-library.html or http://www.instructables.com/id/Arduino-LeonardoMicro-as-Game-ControllerJoystick/ for more details) I have received numerous requests for enhancements. Most of these requests fall into the following two categories:

To accommodate these requests (and a few others) I have release Version 2.0 of the Arduino Joystick Library.


The joystick or gamepad can have the following features:
These features are configured using the Joystick_ class’s constructor. 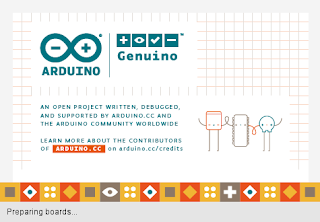 The latest build of Version 2.0 of the Arduino Joystick Library can be downloaded from the following GitHub repository:
https://github.com/MHeironimus/ArduinoJoystickLibrary/tree/version-2.0

The library can also be downloaded directly using the following URL:
https://github.com/MHeironimus/ArduinoJoystickLibrary/archive/version-2.0.zip


The example Arduino sketch files listed below are included in this library. These will appear in the Arduino Example menu when the Arduino Joystick Library is installed.

The JoystickTest example sketch is included with the library. I recommend using this example to verify everything is working properly before beginning to write your own sketch files. Load, compile, and upload this example sketch file to an Arduino Leonardo or Micro using the Arduino IDE (version 1.6.6 or above).


Once you have uploaded the JoystickTest sketch file to the Arduino Leonardo or Micro, perform the following steps to verify everything is working properly. Note: the following steps are for Windows 10. If you have a different version of Windows or a different operating system, these steps may differ. Open the “Devices and Printers” window. This can be done by clicking the Start menu or pressing the Windows Key and typing “Devices and Printers”.

The Arduino Leonardo or Arduino Micro should appear in the list of devices. 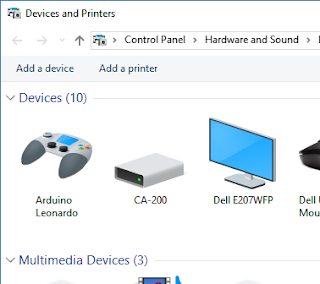 Right mouse click on the Arduino Leonardo or Arduino Micro to display the settings menu. 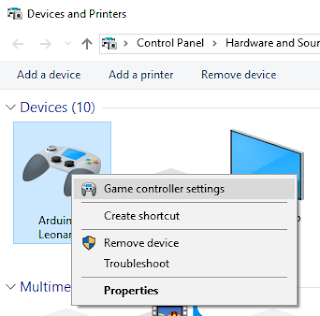 Select “Game controller settings” to get to the “Game Controllers” dialog. 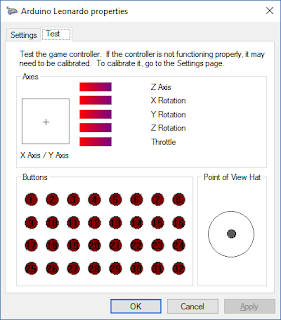 While this dialog has focus, ground pin A0 on the Arduino to activate the test script. The test script will test the game controller functionality in the following order:


Once the Arduino Leonardo or Micro has been tested using the JoystickTest example, I suggest making a simple gamepad controller. This controller will have five buttons: up, down, left, right, and fire. 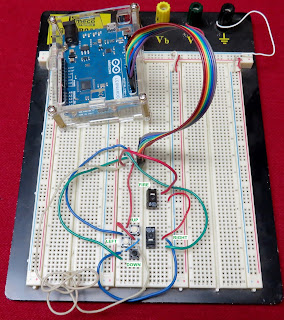 Upload the GamepadExample example sketch file to the Arduino Leonardo or Micro. This example is included with the Arduino Joystick Library. 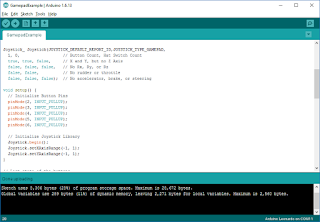 Open the game controller properties or use the joystick testing application of your choice to test the behavior of your gamepad. 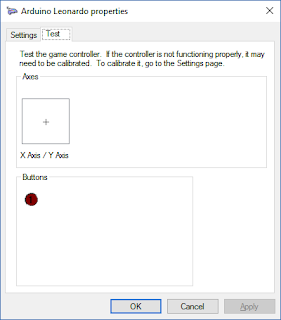 The complete documentation for the Arduino Joystick Library can be found at https://github.com/MHeironimus/ArduinoJoystickLibrary/tree/version-2.0.

It is possible to set the text color of an HTML INPUT element's placeholder text using the following browser-specific css:

Posted by Matthew Heironimus at 9:29 PM No comments:

I recently worked on a Node.js project were we were doing our development on Windows 7 machines, but the actual hosting was being done with Cloud Foundry (running Linux). This website contained a number of graphical images, which appeared correctly on our Windows 7 development machines, but when we deployed our application to Cloud Foundry, a number of the images would not appear. The cause for this discrepancy between environments was Linux is a case sensitive operating system, but Windows is not case sensitive.

To resolve this issue we went through our code and verify the case of the filenames matched any references to those files in our source code.

The following is a simple gulp example showing how this plugin can be used:


The error message that is generated by this gulp plugin will look something like the following:

Posted by Matthew Heironimus at 6:00 PM No comments:

Remote desktop allows you to log into a desktop (i.e. X-Windows session) on your Raspberry Pi. If you have the Raspberry Pi connected to a physical monitor, you will not be logging into that desktop, but a new desktop that will be dedicated to your remote desktop session. For instructions on how to remote control the Raspberry Pi from Windows, see the second half of the article.

Remote controlling allows you to control the currently active desktop (i.e. X-Windows session) on your Raspberry Pi. With this technique, you can control (e.g. manipulate the mouse & keyboard) the desktop that is shown on the physical monitor that is connected to the Raspberry Pi.

Posted by Matthew Heironimus at 6:09 PM No comments: