Opening the Address Book from .NET

The Problem
In today’s world, applications often to need to send e-mail messages. The .NET framework has a class for sending e-mail messages (System.Web.Mail.SmtpMail) that works pretty well (it has some shortcomings, but that is a topic for another article). In order to send an e-mail to someone, you need an e-mail address. Most people keep their e-mail addresses in a MAPI-compliant address book, like Outlook, Outlook Express, etc. The .NET framework, however, does not have a mechanism for opening and retrieving e-mail addresses from this address book. This is not good.

The Typical Solution
The typical solution to this problem is to use Simple MAPI’s MAPIAddress method to display the address book. This method works for most situations, but has one major drawback. It only works for ASCII text. There is not a Unicode version of Simple MAPI interface. If you display the address book and select a person with a Japanese (Chinese, Thai, etc.) name, your application will see their name as a series of questions marks (????).

The Extended MAPI Solution
The only way to support Unicode names is to use Extended MAPI. Unfortunately, Microsoft does not support calling the Extended MAPI library from .NET (see KB 813349). I have not personally tried to call the IAddrBook::Address method from .NET, but I have read enough newsgroup articles to think that it is probably not worth the effort.

My solution to this dilemma was to create an ATL/COM/Active X dll that wrapped the Extended MAPI call. I then called this dll from my .NET application using COM Interop. This solution worked very well for what I wanted, but it adds an extra two dlls to my application (oh well).

The Code
Here is the ATL code I wrote that makes the Extended MAPI calls.

Support policy for Microsoft Exchange APIs with the .NET Framework applications
http://support.microsoft.com/Default.aspx?id=813349
Posted by Matthew Heironimus at 4:22 PM No comments:

I made some updates to the Japanese e-mail program I wrote for my wife. The biggest update was to support address books containing Unicode (i.e. Japanese) names. The standard simple MAPI object does not support Unicode, so I had to use the extended MAPI library (not very fun). I hope to write up an article that discusses the pain I went through to get this to work properly in the near future.

Updated on 12/22/2010: I no longer have Japan Mail available for download because Office 2003 and above correctly encode Japanese e-mail messages. If for some reason you would like a copy, send me a note and I will e-mail it to you.
Posted by Matthew Heironimus at 4:26 PM No comments:

The Problem
We had a new Microsoft Windows Server 2003 Web Edition server from Dell that had a duel Intel(R) PRO/1000 MT Network Card install. We had one of the network card’s ports connected to our LAN and the other network card’s port connected to the DMZ. Occasionally the machine would stop responding to any traffic that came from the Internet. It would still respond to LAN traffic, but WAN traffic was blocked. We put a network sniffer on the network and confirmed the WAN/internet packets were getting to the server, but the server was not responding to the traffic. Disabling and re-enabling the network card would fix the problem. 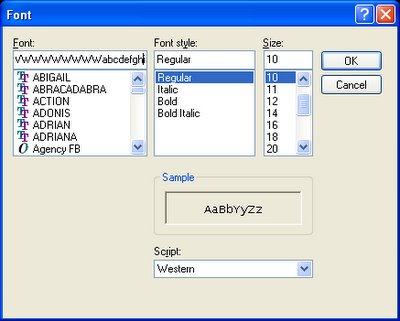 Example of a textbox with this issue. The carat is actually to the left of the "i" even though it appears on the right side. 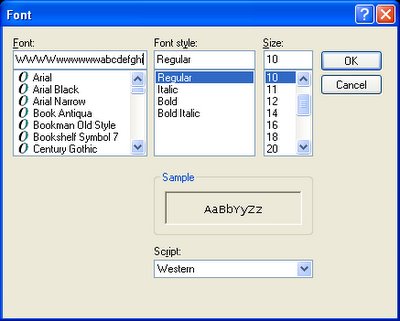 This is the same textbox on a machine without Asian language support. As you can see, the carat appears on the right-hand side of the "i" character as you would expect.

This only happens at the end of the textbox.

Am I the only person who has noticed this, or are there others of you out there? If you have noticed this and it bugs you, please leave a comment. I want to know how many of us there are out there.
Posted by Matthew Heironimus at 3:45 PM No comments:

The Problem
We had an interesting situation come up recently with one of the web services we were writing. This web service returned a string value back to its caller, but occasionally the code Visual Studio .NET generated to handle the web service call would raise the following error message: “There is an error in XML document (1, 285).” The underlying error message was: System.Xml.XmlException: ' ', hexadecimal value 0x11, is an invalid character. Line 1, position 351. This caused us to do a little investigation and we discovered that the returned string would sometimes contain a 0x11 (17) control character. We determined that this character should not have been there in the first place, but we were surprised that it should cause an error. We did a little experiment and discovered that any ASCII character in the range of 0x00 to 0x1F (0 to 31), with the exception of 0x09 (TAB), 0x0A (LF), and 0x0D (CR), would cause this error. This error did not occur in the web service itself, but in the code that processed the XML response returned by the web service. This code is generated automatically by Visual Studio, so there is not much we can do to control it.

XML String Limitation
We did a little more digging and discovered that string values in XML documents are not allowed to contain characters in the range 0x00 – 0x1F (0 – 31), except for 0x09 (TAB), 0x0A (LF), and 0x0D (CR). Details about this restriction are documented in the following locations:
https://www.w3.org/TR/xmlschema-2/#string
https://www.w3.org/TR/xml/#dt-character

Posted by Matthew Heironimus at 3:17 PM No comments: